Noël Bright created this digital portrait of her grandfather.  He actually had a watermelon cake for his 80th birthday!  The grandchildren were disappointed it wasn't a real cake, but he was delighted!

He wasn't supposed to make it, but on October 19, 1921 the doctor placed William Bright into the arms of his mother and she knew she held a miracle.  The pregnancy had been hard and the doctor warned that she would probably lose the baby as well as her own life.  While her hard-working agnostic husband hoped for the best, Mary Bright prayed for a miracle.  "Please let this child be born, Lord.  I will give him to you."  She had no idea her miracle boy would be used by God to change the world!

You can read his bio on the About Us page.  Bill Bright touched hundreds of millions of lives around the world.  Here, however, we want to spend his 100th year sharing some of the thousands of stories behind the "numbers".  We will share notes from people around the world-- stories of changed lives, hope, courage and amazing faith.  At least once a month Brad will share stories about his dad he's never told publicly before.  We hope you will share some of your Bill Bright stories with us as well.

He would not want you to close this page thinking what a great man Bill Bright was.  He never sought the spotlight.  It was never "about him."  If what we share about Bill Bright's life doesn't make you long to know God the way Bill Bright knew God then we will have disappointed him and cheated you.

Together, let's celebrate what God did in and through this son, husband, father, grandfather, mentor, friend and most important- slave of Jesus.

We will frequently post pictures and other memories from Bill Bright's life.  Some will be of family moments and others from ministry memories.  If you have a picture you would like to share please contact us!  This month it's all about love!

Bill Bright loved, loved, loved Jesus first and Vonette Bright second.  She saved years of Valentines cards she received from him, and they tell a story of a man who strove to love his wife well.

Bill and Vonette always viewed marriage as a partnership.  They said,

"No marriage can succeed if either spouse insists on taking center stage.  Consciously looking to the welfare of our partner first - enables us to open ourselves to each other."

Their love story is a powerful example of what God intends when two become one.  They were each other’s greatest cheerleader, confidant, and friend.  As you will see from the pictures, they also made each other laugh.  Life and love were not always easy, but they usually managed to find joy and humor in the midst of the challenges. 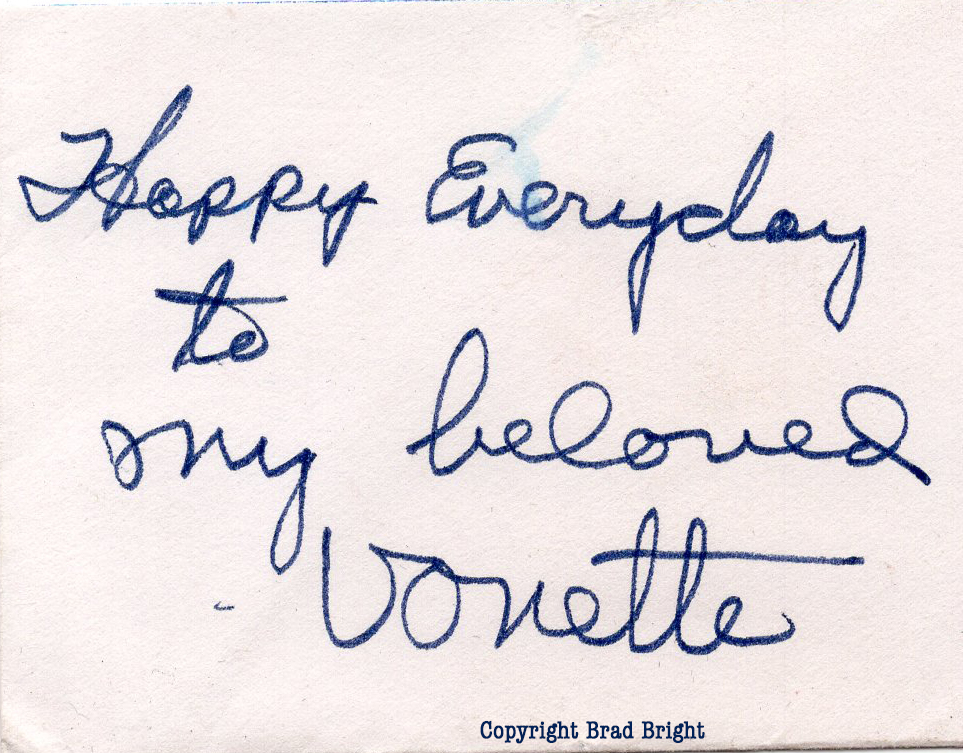 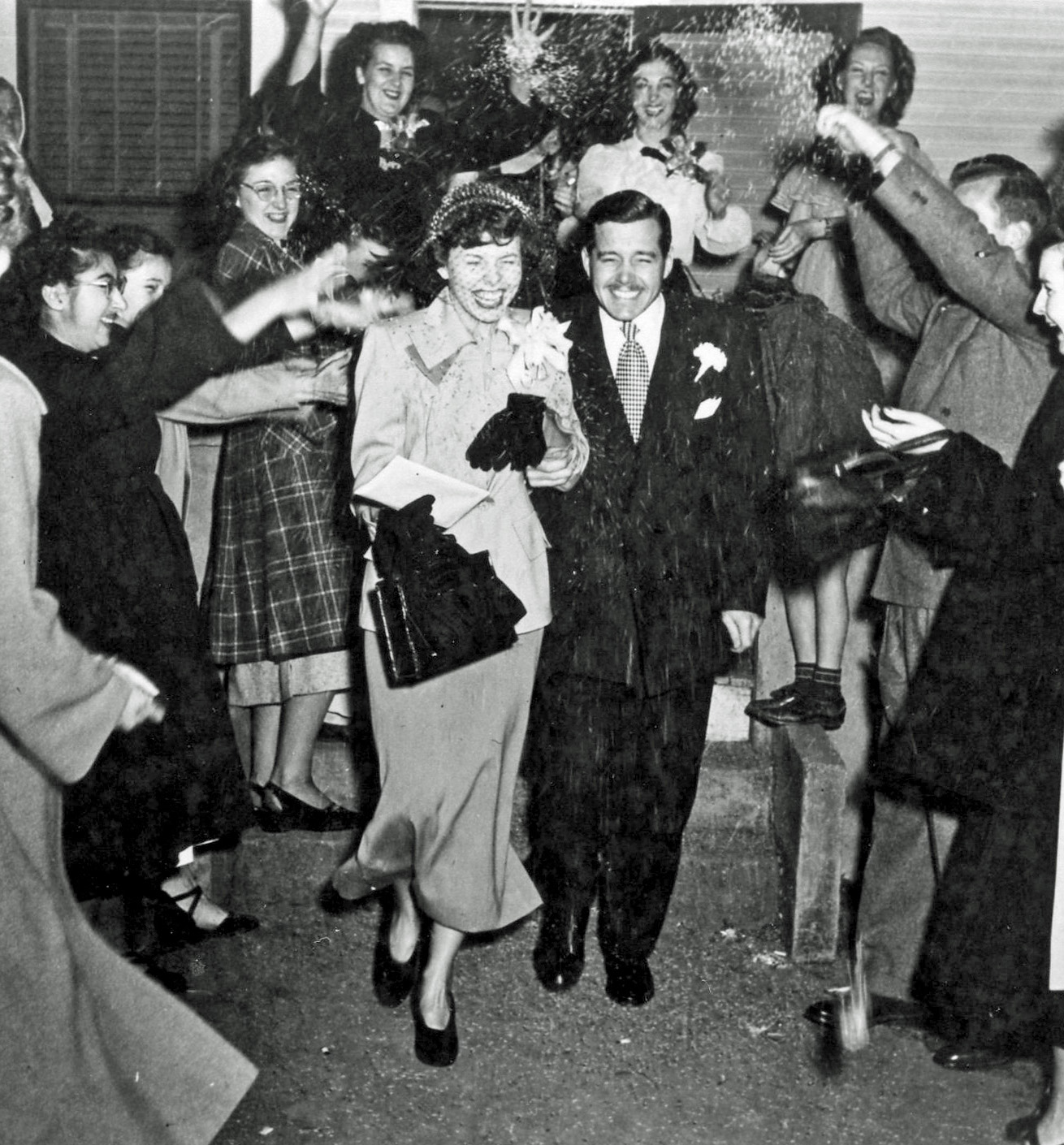 December 30, 1949 a partnership was born that would one day take the world by storm.  What joy! 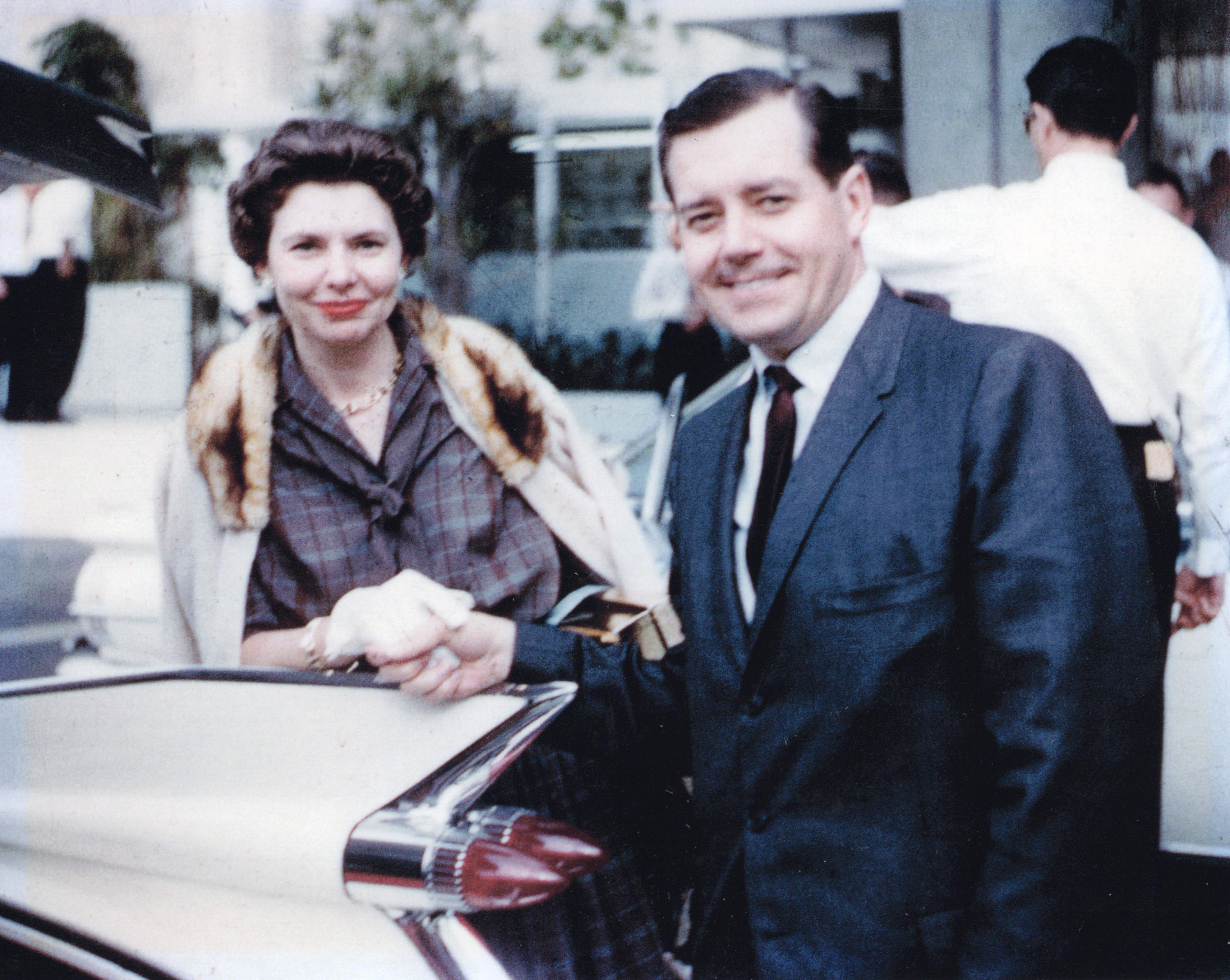 When he asked her to marry him, Bill Bright promised Vonette a huge home, the finer things of life and to travel the world.  They were well on their way in a few short years! 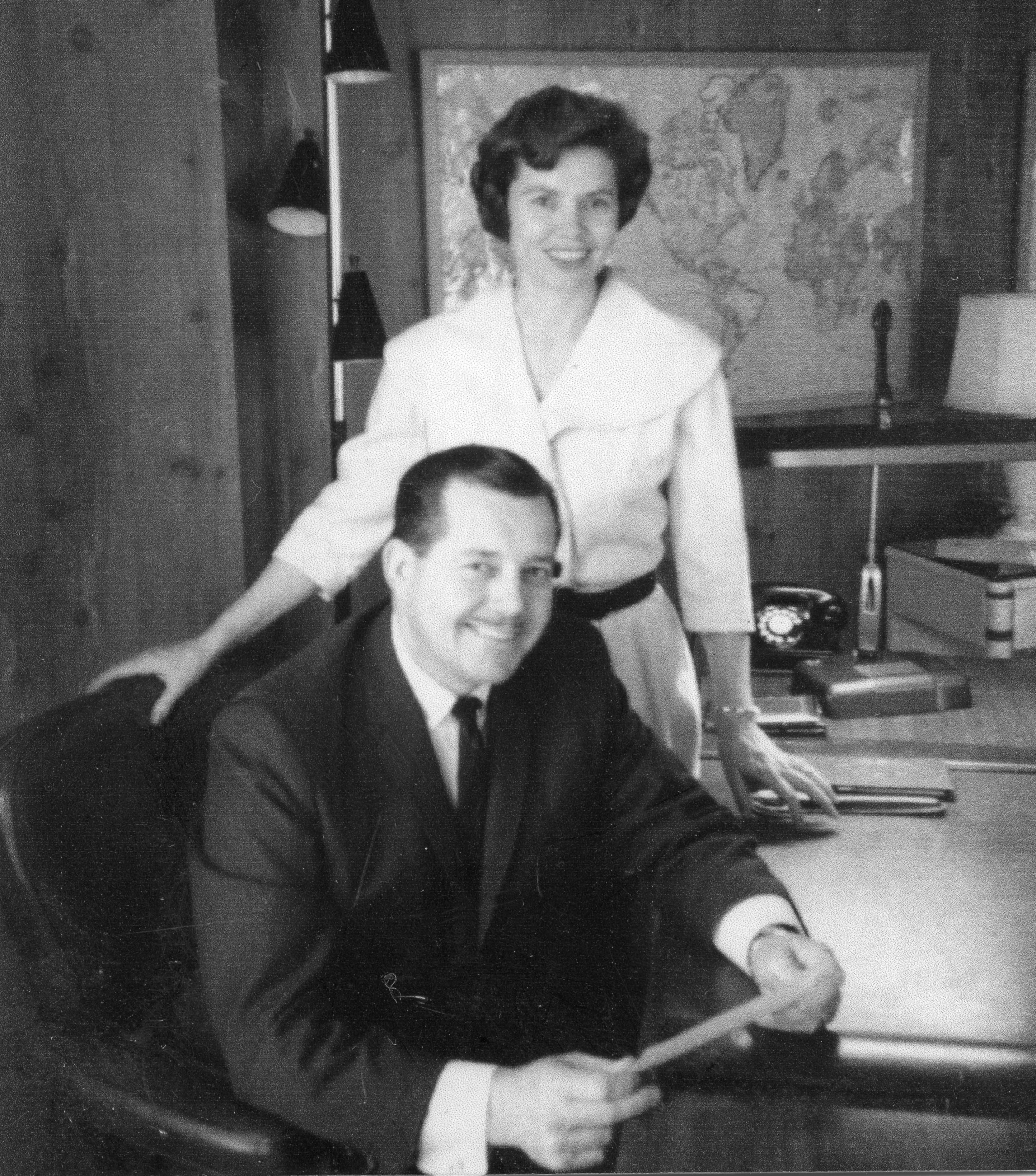 Partners from the beginning. 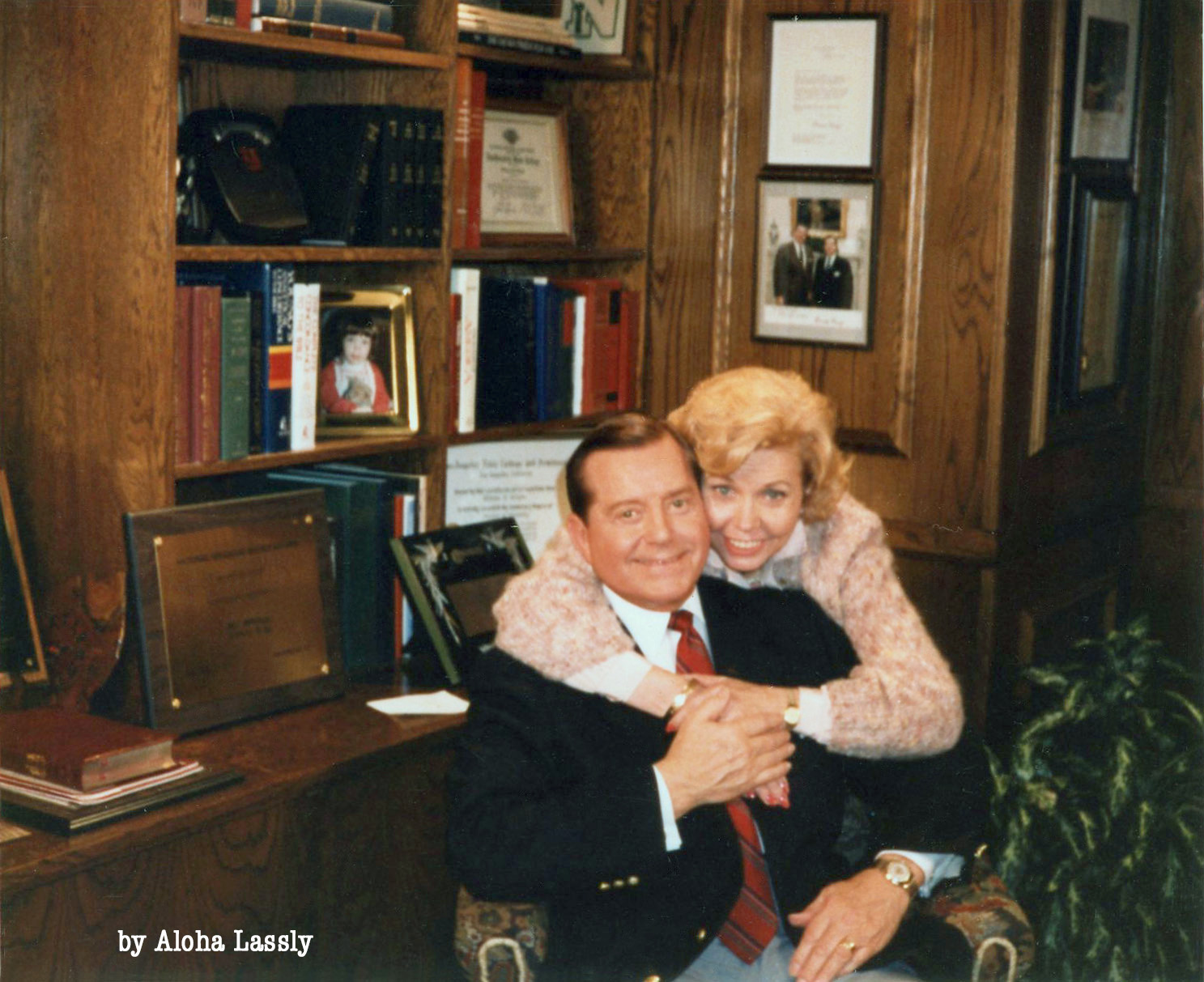 Partners through the ups and downs. Partners to the end! 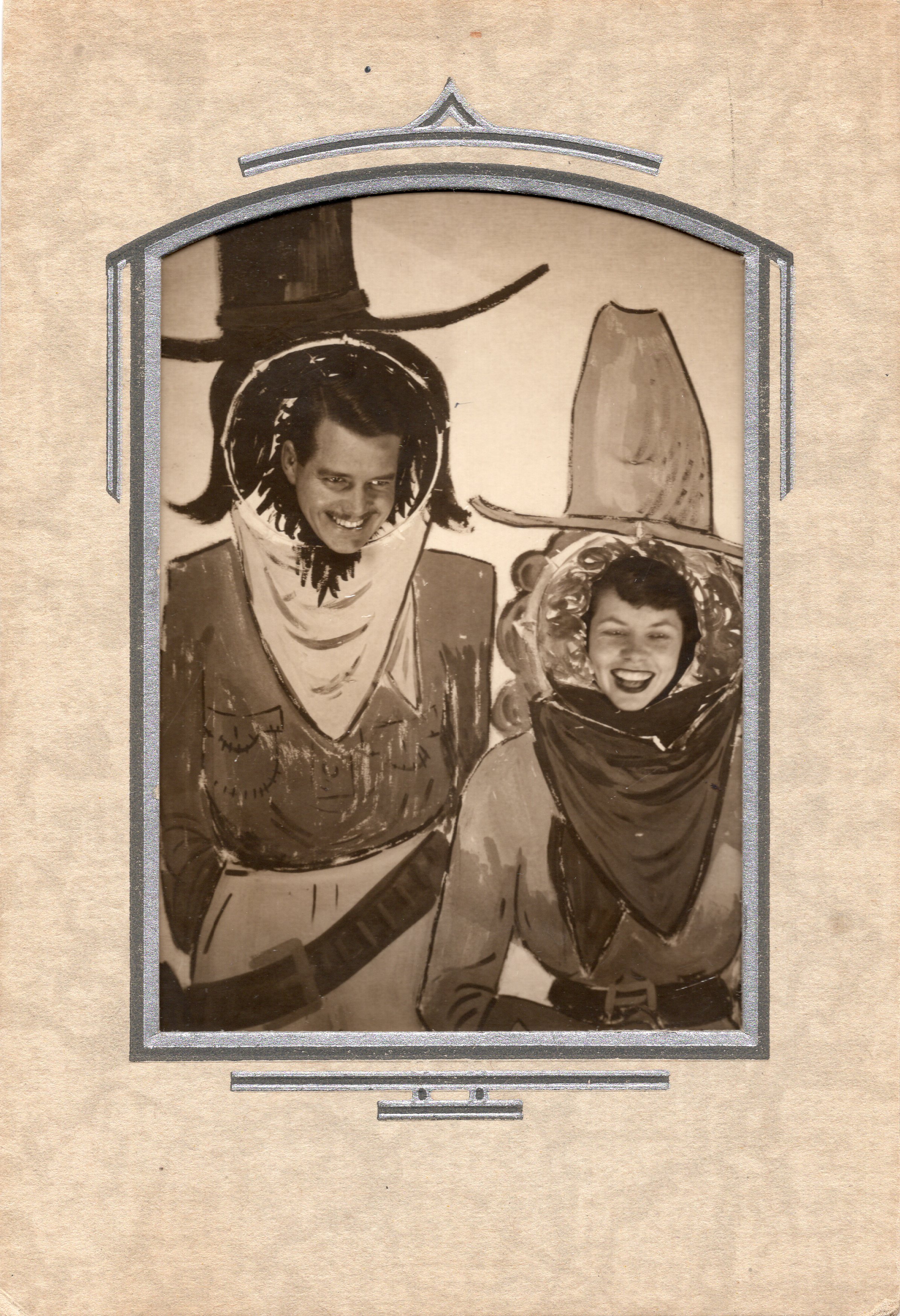 Dad had a great sense of humor and mom loved adventure and parties (she could always find an excuse for a party!). 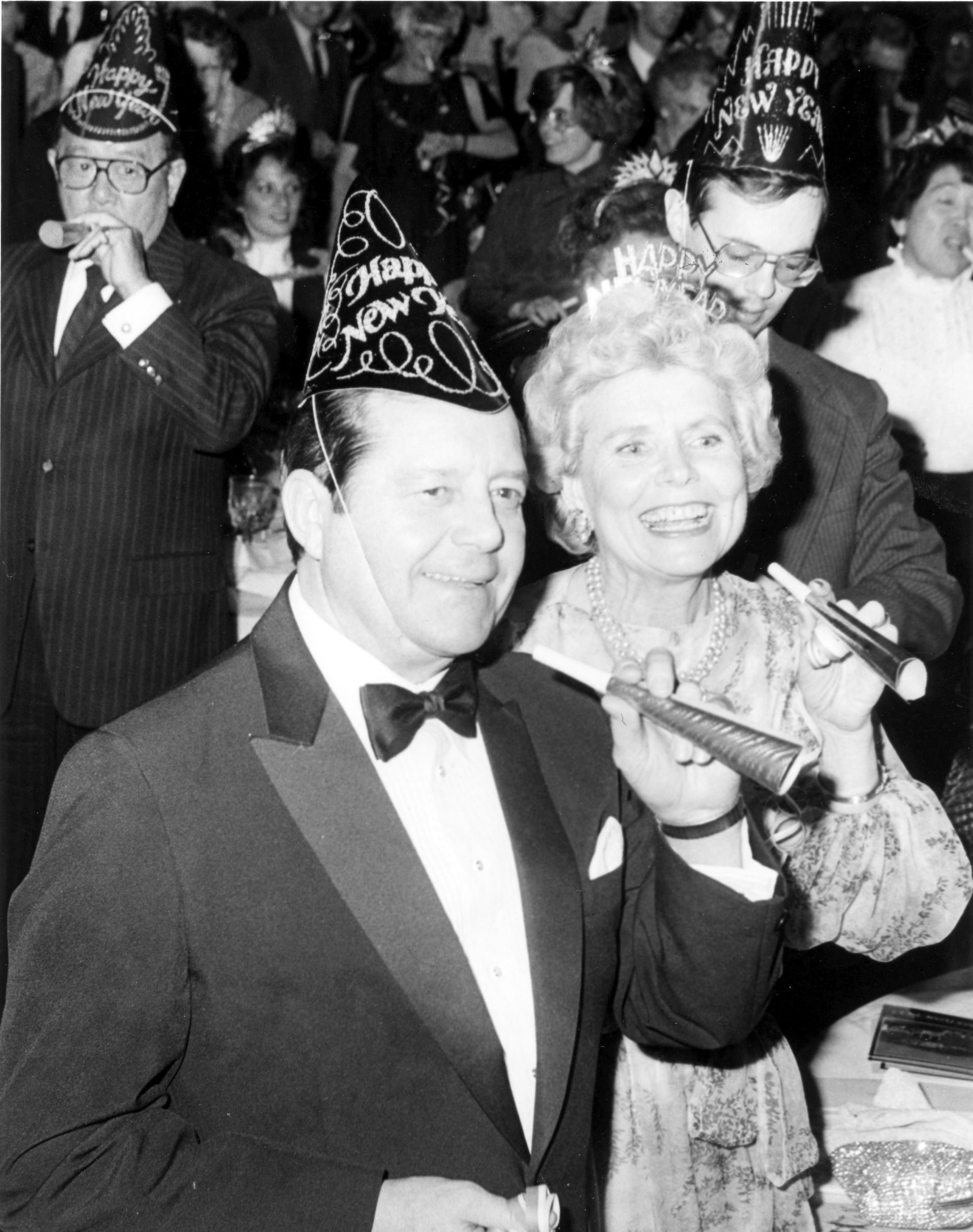 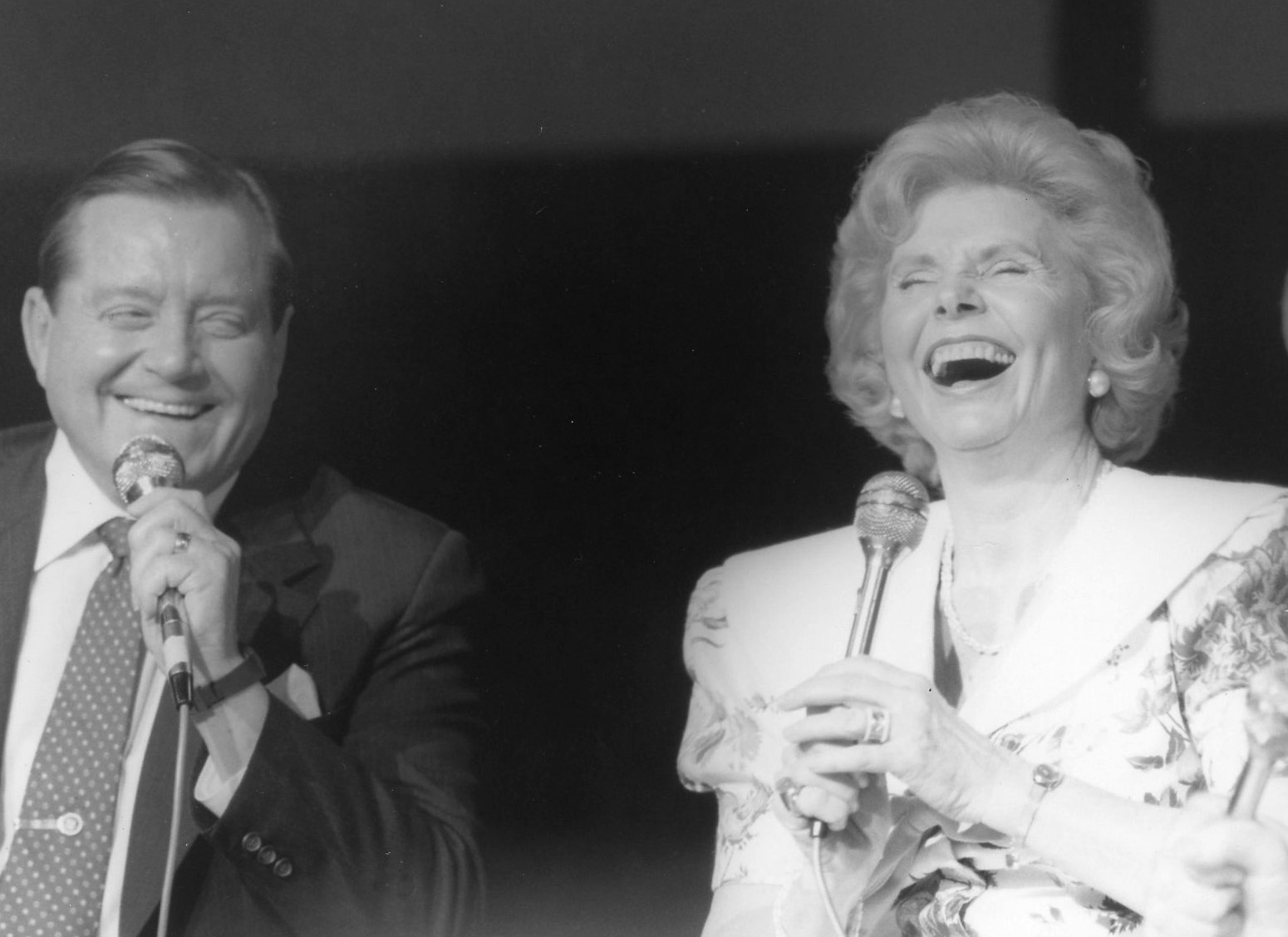 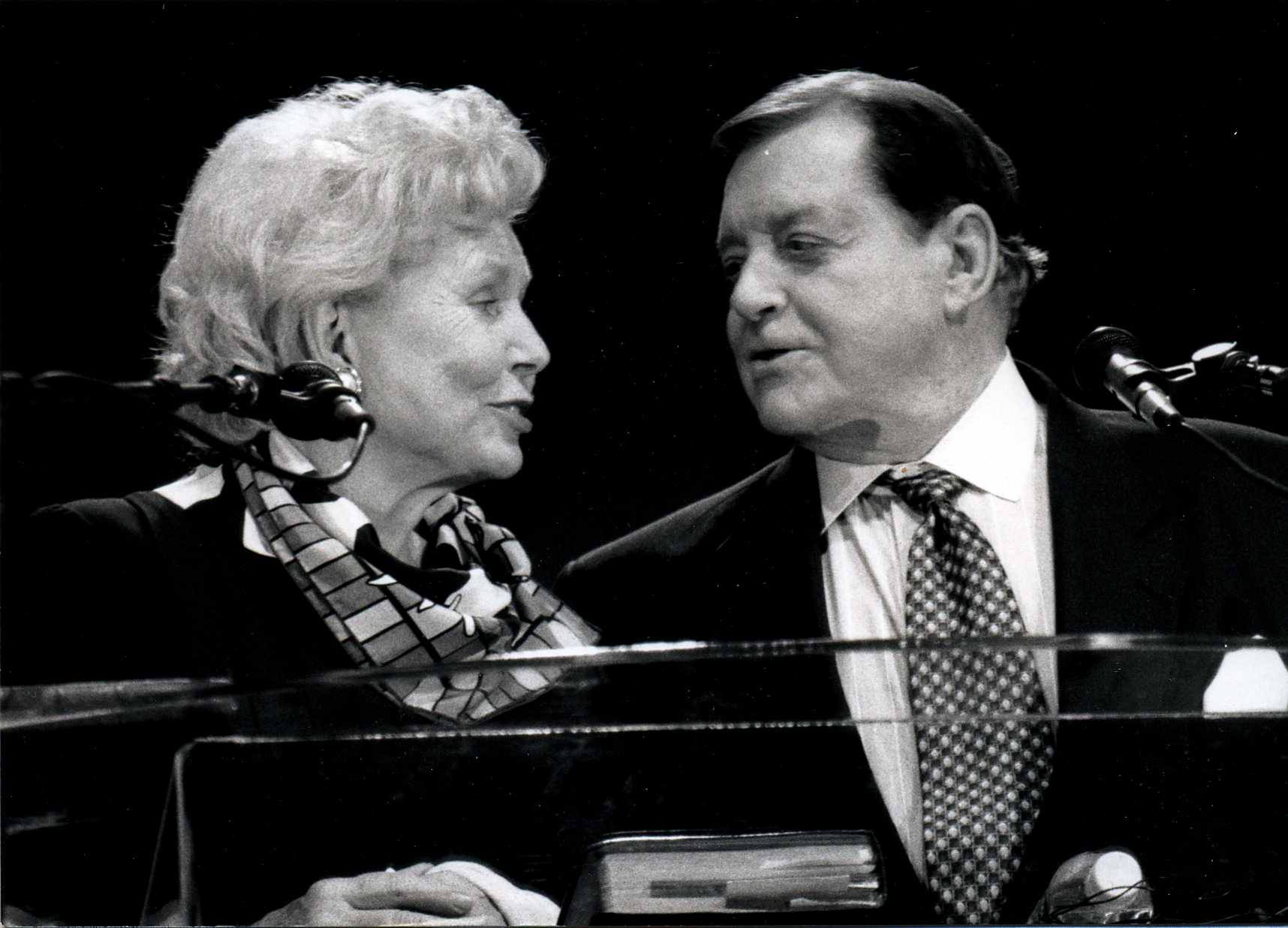 Speaking together at a conference. 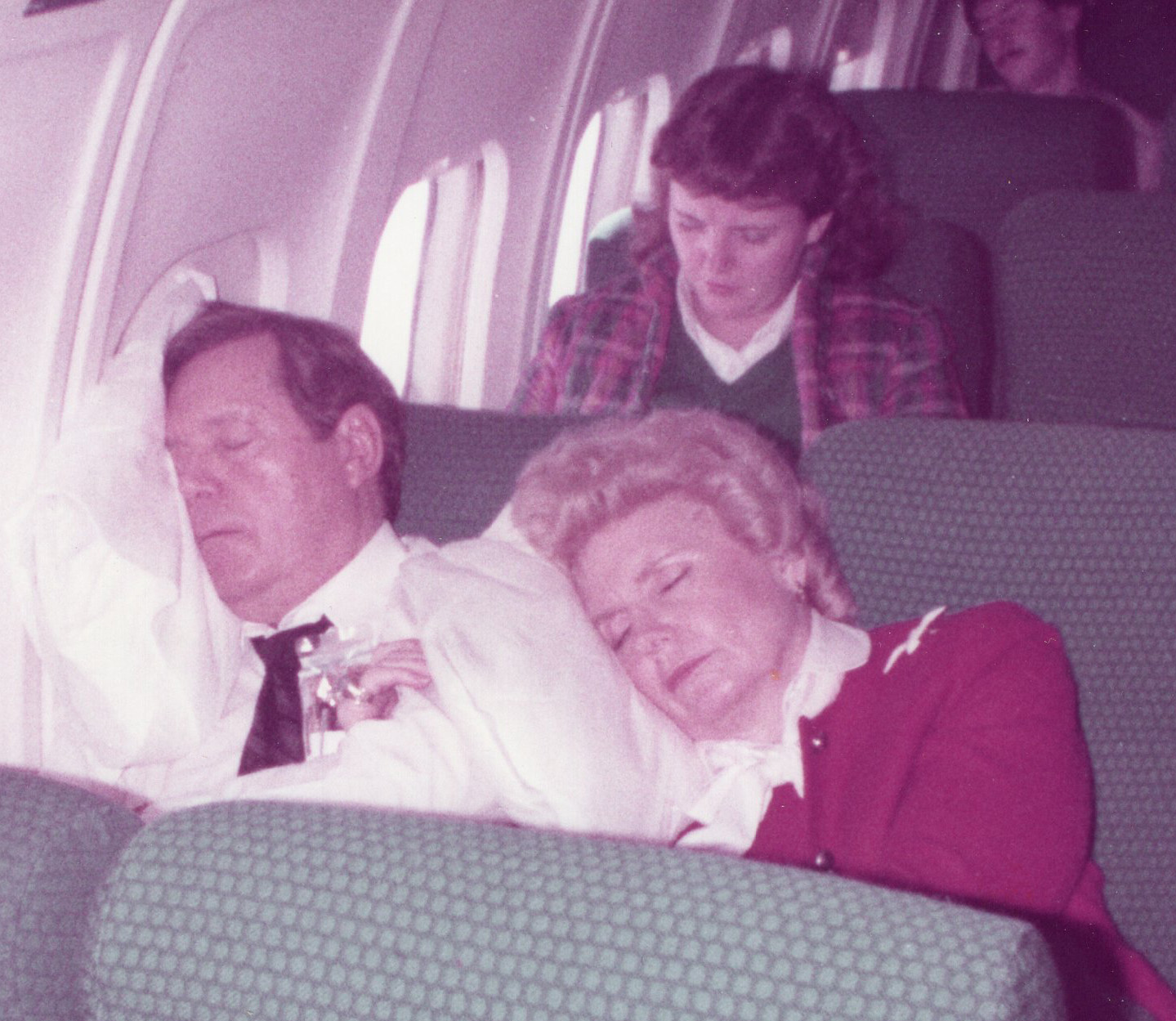 Grabbing sleep whenever they could! Mom with pic of dad.

Bill Bright received thousands upon thousands of notes and cards over the years.  We will post different ones each week.

Bill always gave the glory to Jesus for any life that was changed through the ministry God called him to.  The notes stand as inspiration to all who will follow Jesus heart, soul, and mind.  God can change lives through you as well!

"As a result of your humility and availability to our Lord and Savior…I have been saved, my best friend has been saved, people in the Middle East have been saved, countless people have heard the Gospel and the list goes on from one vision." –S

"I am grateful for you Dr. Bright—for modeling the Spirit-Filled life. For never wavering from the focus of the Gospel message and the power of the Holy Spirit. For your spirit of unity that crosses denominational lines. For your contagious love for our Lord." –TH

"I was a junior at Vanderbilt when I first met you. I had heard much about you from our staff and reading your books. Your presence, however, was even more revealing. By that I mean that I saw your heart. I saw your vision for the world, your heart for people and your unswerving love for the Lord Jesus." –B

Each month Brad will share a story about his dad that he has not shared publicly before. BILL BRIGHT AND THE ATTEMPTED COUP OF ‘69

The story of the attempted coup of Campus Crusade for Christ in 1969 has been told many times.  There are some details, however, that never made it into the official story.

My dad, Bill Bright, began hearing reports from field staff that key directors in the U.S Campus ministry were making statements contrary to the mission of Campus Crusade for Christ. Whenever he would confront any of them about the reports, they would deny them.  According to my dad, this went on for about a year: reports, denials, more reports, more denials.

Finally, everything came to a head late one night after returning home to Arrowhead Springs from a six-week trip to Asia.  At 3:00 in the morning, one of the directors called Bailey Marks, his assistant at the time, demanding an immediate meeting. Exhausted from the trip, Bailey told them he and Bill would meet with them the next morning.

At 9:00 a.m. the directors crowded into his office demanding my dad’s immediate resignation. If he did not, they said they would take the staff and start a new ministry. How would you respond if your most trusted and talented leaders demanded you turn over your business or ministry into which you had poured 18 years of your life?  My dad told me what went through his mind was, “This is God’s ministry, and He can do with it as he pleases.” And he meant it.  I heard that same attitude reflected in his words to me after he gave away the $1.1 million Templeton Prize in 1996, “I gave it all away 45 years ago.” The coup leaders mistakenly thought they could take the ministry away from Bill Bright.  But Bill Bright knew it was God’s, and only God could take it away.

The story of the coup is often told by those who stood by my dad and were loyal to the original vision.  Their perspective is powerful and I encourage you to listen to them tell the story at: legacy.cru.org - The Coup - Insurrection of the Heart.

However, I learned the rest of the story 20 years later from a very different source. I was talking with one of the men who had been a part of the attempted coup. He told me he clearly remembered the exact moment he realized they lost the confrontation. It was the moment my dad said:

Gentlemen, let’s get on our knees and ask God what He wants.

Dad had determined to love his betrayers, but most importantly, he never forgot who was in charge. Ironically, it was his call to prayer that signaled defeat to the insurrectionists.

What I find amazing is my dad never doubted God’s call on his life even as the men he had trusted like brothers lied to his face, betrayed him, and tried to hijack the ministry. He said he knew if the coup leaders made good on their threats he might have to start over, but he never doubted God’s original call to focus like a laser on helping to fulfill the Great Commission. That was the sole purpose of Campus Crusade for Christ from its inception.